The Timeline
Sponsored by

Hosting providers and users can submit applications for inclusion in the Readers' Choice Awards. 25 of the nominees with the highest number of nominations, will move forward to the voting round.

In a month-long voting period our readers will have their say, and will select the top 10 best web hosting companies of 2011.

The Annual Awards will culminate with the announcement of the Top 10 Best Companies in all categories on 17 January 2012 and one of our readers, who took part in the nominations or voting, chosen randomly will receive the big prize - Black iPod Touch 8GB. 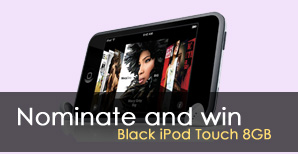